An entertaining match and the first in the NEW GOLD CHALLENGE series. The idea is to follow the progress of the challenge as the winner of this bout will be matched against another opponent, the winner of that bout then goes forward. Matches will all be longer than normal, but can be any style that is agreed by the two wrestlers. Two attractive newcomers using semi-pro moves clash in a match over 10 x 5 minute rounds in a pro ring. Both are dressed in boots, spandex tights and T-back briefs, blonde Terri and brunette Caz look sensational.

The girls are briefly interviewed before the bout and both appear very confident! Terri has a weight advantage and looks more powerful that the younger Caz. A tentative start by them as they warm up and receive encouragement from their corner girls. Although Caz scores a couple of good falls she struggles against Terri who uses her power well in some weakening holds as well as the ropes and postings. 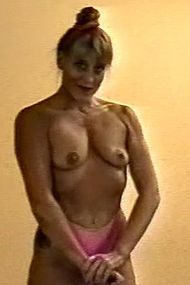